OK, there positivity girl . . . and to think you were going to write about that beauty of a blue butterfly today!.

“SHIT IF I MUST SAY”, was a saying that we used to tease my mother-in-law about every time “something” went wrong. One day, many years ago, she had lost her keys. You know how it is when a “lost” item is somewhere and so you check the same place the 10th time, even though the nine times before it failed to be there. You know it’s not lost, stop saying that, “I just don’t know where it is”. Evidently they were found when getting ready to cook dinner. She absentmindedly left her keys in the freezer of all places. “Shit if I must say!” came out of the mouth of the organist and soprano, church choir member. Scandalous! Just scandalous!

What you heard out of my mouth

was not attached to

The weather app gave us the “your clear”. No rain for 5 days. Honey! Drop everything, we have until TUESDAY! So we did exactly that, we literally turned off the rest of the world and started stripping the roof off the flip house. Knowing we only had five days, we have worked hard and fast. I think the only time we stopped was for food and sleep. Yesterday MORNING the Weather app changed course and gave us yet another day, no rain until WEDNESDAY!  Phew! Maybe we can breathe!

Yesterday with the demolition over we were finally screwing in the plywood underlayment! Yay! However, it was so hot and humid and I started to feel sick from the heat, and went home to cool down. I was worried about my husband, so, a couple of hours later I returned to fetch him. I literally had to duct-tape my husband, drag him away to the car to make him come home for a few hours to cool off and rest. (You know that look a wife can give, it’s as strong as invisible duct-tape which will put the fear of God in any man). So, we had a few hours to rest and would return after five when the sun wasn’t quite as hot. The roof was about 1/3 covered. We had gotten a lot done and could finish in cooler temps. 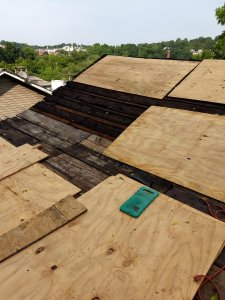 Remember the “clear skies until Wednesday?” When I woke up from “resting my eyes.” The sky seemed a bit dark. I looked on the same Weather app and see a yellow bar with a severe thunderstorm warning. So I checked the radar to see that the storms were far north. However, No, No, No, the storms that showed far north evidently had something else in mind. I think the skies were like a woman on a trip who waited too long for the rest stop. When the rain started, it came in buckets. The storm lasted only five minutes, however, it was five minutes of buckets, cats and dogs, wind, rain and yes, puddles, literally puddles inside the house!!!

Hubby gets points for contracting knowledge, “You never finish anything until the roof is done”. Fortunately, all we had done on the house is strip walls and floors. The damage caused is minimal because there is little left inside to destroy. There will be some insulation to replace and one ceiling that I thought I could patch, rather than pull out will now be pulled. Actually, we are quite fortunate.

HOWEVER, I’m not feeling exactly positive this morning! Thus my point. The worse thing you can do in trying to maintain a positive lifestyle is to be in denial that nothing wrong, bad, annoying, disturbing, disastrous, or that will rain on your parade are not going to happen. They will. As I said words, without “if I must say” attached to them last night and was on the brink of crying . . . don’t say to me, where’s the positivity?  It is not here in this situation right now, however, I know it will return.

Actually, after cleaning up buckets of puddles inside, when the second set of storms came, we were on the roof, in a thunderstorm, trying desperately to get the tarps set, I was reminded of my childhood when my Dad would set out tarps for a slip & slide, gosh, that was fun, but this wasn’t!!! It was terrifying.

Where is the positive in this?

The best and probably quite passive aggressive thing I did out of all this? I uninstalled the Weather App!!!!

(Still) Enjoying the Adventure! (I can write about the blue butterfly another day!)

Loving life & sharing with others! View all posts by Karen "Dink" Urbanski