We had some pretty significant flooding here in Pennsylvania yesterday. Our yard became a lake for a short time, well, actually twice. Thank goodness our house was unharmed and we actually had fun, I mean, there is nothing better than playing with a German Shepherd in your flooded yard!

We saw waterfalls on our hill that we never knew existed.

One of the highlights of the day was finding a mother duck and 8 ducklings at our local park. They must have hatched during the rain the night before, they were so small. 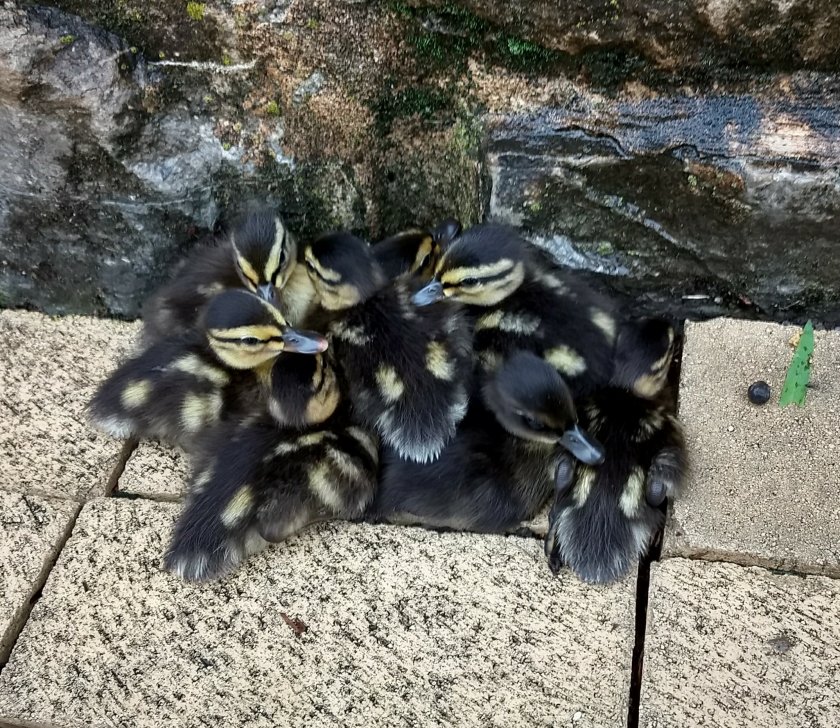 While I was admiring them and taking photos and squeaking, “How cute!”, my husband says, “This poor mama is exhausted and there is no way the little ones can get out of here.” They were stuck in a dead-end area with walls and steps that were too high for the little ones to manage.

So, he slowly and gently leads them toward the steps. He guided the babes up along with Mama who suddenly decides that he’s a predator and went after him. (I have video, it’s hilarious!) Determined, he continued his mission and the babes and Mama were reunited with the other ducks and waddled off telling them about their recent adventure.

Later in the day, hubby shows me his hand where there’s a red mark —- evidently, he was bit by Mama-Duck! This morning I can’t help but giggle, I mean, really, WHO GETS BIT BY A DUCK!?!?!?!

Many people have stories to tell of grand adventures, but what a wonderful minority hubby can now claim. . . bit by a duck. Now, that’s something to tell the grandkids!